Plunge Into A Museum Adventure With This Delphi Integration

This really wonderful Delphi app makes truly creative use of the integration of museum visitors with exhibits. Written by Oz Software of Spain, vCoolture makes a trip to the museum into an adventure where visitors using the app not only hear the descriptions offered by traditional audio guides but a plethora of additional information such as a biography of the painter or sculptor of an art exhibit, links to relevant web pages such as a contemporary artist’s own website or other publicly available information like a Wikipedia article.

How does vCoolture achieve this integration magic?

Oz Software makes use of Delphi’s ability to integrate with iBeacons – discrete little Bluetooth Low Energy devices – which are carefully placed at strategic points around the museum or art exhibition. When a visitor using the mobile device app comes within range of an iBeacon the app looks up the iBeacon’s hardware ID and retrieves the facts, photos and links associated with it. As well as visual information at the same time the device begins playing any audio linked to the exhibit’s iBeacon. To the visitor it all seems to work by some kind of invisible magic, but that magic is pretty easy to achieve with RAD Studio Delphi and a little imagination.

What other types of integration does the app enable?

Along with the images and audio the app also provides a map of each room as the user enters it. This map/iBeacon integration means the user not only sees a smaller, more concise map but can have relevant exhibits highlighted on the map in greater detail than could be done on a simple full-build floor plan. vCoolture is an example of software for mobile devices that substantially improves the user experience in visiting museums or any kind of exposition, offering many more services than those offered by traditional audio guides.

vCoolture also uses the ready-to-go components in Delphi to provide in-app billing using Google Ad integration as well as the ability for the museums to display virtual reality ‘billboard’ advertising which seem to be projected on the floor of the halls or even the exhibits themselves! Gift merchandising information can also be integrated into the information associated with the iBeacons so things like relevant books, mementoes and T-shirts sold in the museum gift store can be displayed next to an exhibit.

As if all of this wasn’t enough, vCoolture has one more trick: to make a great visit even more interesting, vCoolture includes a ‘Enigma’ game built in. Visitors have to find the answers to questions posed by the app which allows them to ‘find’ 10 objects hidden ‘behind’ of some works of art. There is an interactive or group play element to because the game allows you to compete with friends or colleagues.

What does the Oz Software say about vCoolture?

“The vast majority of applications using iBeacons are specific to a particular museum and only serve for that particular use, so often the visitor is very reluctant to install a heavy application for a single use. vCoolture is a single App for any museum or exposition, there is no limitation, since all the information is loaded on demand from a local or remote web service. But also, every museum/exposition can personalize vCoolture for them.“

This is really top work by Oz Software and we’re loving how they have used the powerful combination of RAD Studio’s iBeacon integration coupled with Firemonkey’s FMX cross-platform strength to produce a superb mobile app for iOS and Android devices.

‎vCoolture on the App Store (apple.com) 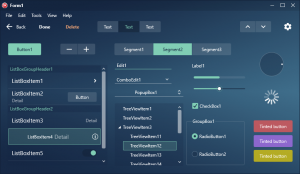